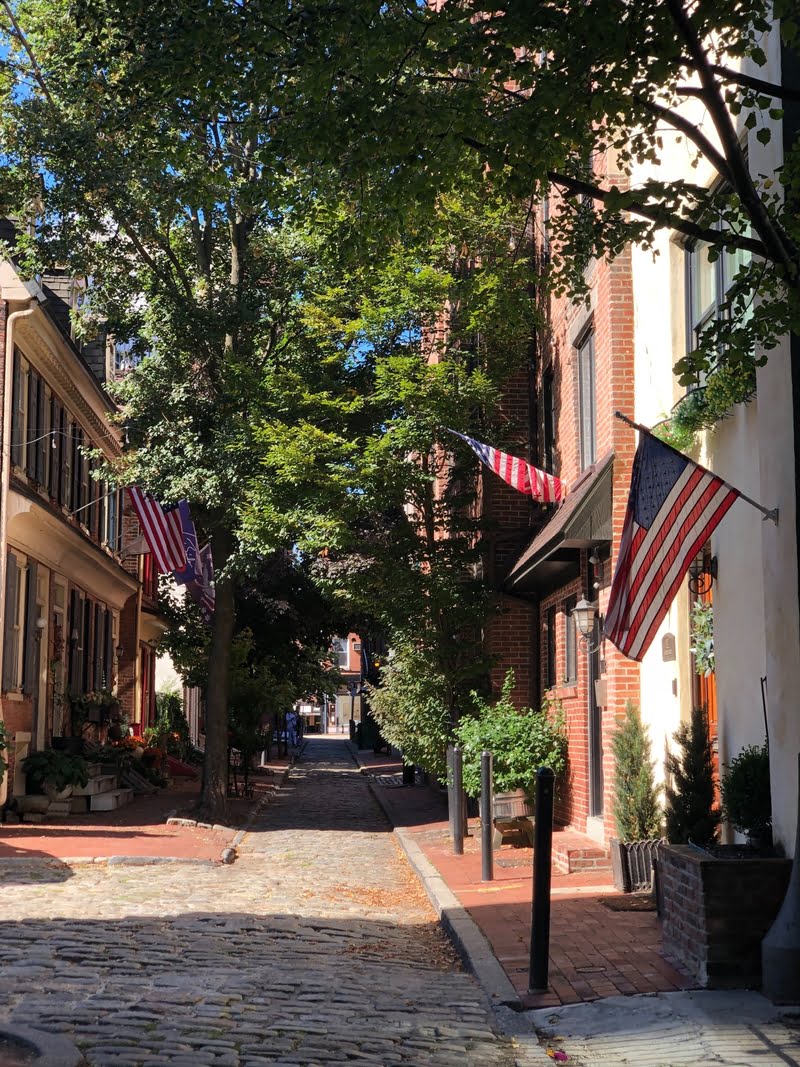 The city of Philadelphia, with 1.5 million residents, is the largest in Pennsylvania and second only to New York City on the east coast. Philadelphia is home to many of our nation’s firsts – library, medical school, hospital and zoo. You can’t forget its most notable first – it is the birthplace of the United States – where the Declaration of Independence and the Constitution were both signed. In fact, history is a big draw for visitors and residents alike with famous sites like the Liberty Bell, Independence Hall and Congress Hall. Those are the travel book highlights and some of the things Philly is best known for, but what we really want to talk about is what it’s like to live in Philly.

A City of Neighborhoods

Philadelphia is as diverse as its many neighborhoods and there’s something for just about everyone here whether a young professional, growing family or mature adults who thrive on all a major city has to offer. Chestnut Hill is great for families with great public and private schools as well as one of the lowest crime rates in Philadelphia. The neighborhood is on the affluent side and boasts many family-friendly activities such as Children’s Music Express, the Morris Arboretum, Children’s Music Express, a library, a wide variety of fantastic parks and playgrounds, as well as shops along Germantown Avenue. Fairmount Park is also nearby, with its many biking and walking, not to mention kid-favorite the Philadelphia Zoo!

Manayunk, on the other hand, is great for the young professional. A mere 15 minutes from the city center this neighborhood seems to always have something going on with the many restaurants and cafes, bars and clubs, and fun local festivals like the annual spring StrEAT Food Truck Festival.  There are many different housing types to choose from including contemporary townhomes, turn-of-the-century row homes, converted churches and chic lofts.

The neighborhood known as University City is directly adjacent to the city center. Its name comes from having the two largest educational institutions in Philadelphia – Drexel University and the University of Pennsylvania within its boundaries. In addition to the two universities there are also nationally known medical centers.  This neighborhood has a college town feel. There’s a cool street-food scene, high-end art galleries, and clubs for hanging out late into the night. The residents of U-City are primarily students and hospital staff.

Fishtown owes its name to its history in commercial shad fishing. It’s a classic working-class neighborhood that is enjoying a renaissance of sorts as young creative citizens and families move to the area and mix with long-time residents. Today it is Philly’s harbor of culinary , music and arts. The residential areas are lined with modest row homes and small businesses that are independently owned – no big box retail here.

Rittenhouse Square is the hub of Philly’s most exclusive neighborhood also called Rittenhouse Square. The square itself was one of five such squares planned  in the late 17th century by  William Penn, the founder of Philadelphia.  The neighborhood is a favorite for visitors and is home to many hotels, and is one of the best places to stay in Philadelphia.  Many of the sidewalk restaurants feature alfresco dining in warmer months, and some are even considered the best places to eat in Philadelphia. There are also locally owned stores, galleries, a wide variety of specialty bars, theaters and entertainment keeping the neighborhood lively year-round. Residences are most notably high-rise buildings with luxury apartments.

Callowhill, known to some as the Loft District because of the residences within reimagined factories, and others as “The Eraserhood,” a nod to David Lynch’s bizarre Eraserhead, which was inspired by this Philly neighborhood.  With these nicknames you can be assured it’s an area of town that caters to the creative. The area is just north of Chinatown and is home to some of Philly’s best live music, a growing restaurant scene and an eclectic collection of art venues.

Callowhill attracts a wide range of residents, too. Young professionals who fall for the high-end condos and lofts and struggling artists drawn to the affordable rent for studio space and galleries.The Fairmount and Spring Garden neighborhoods are frequently called the Art Museum area, mostly because they are so close to the famous arts and cultural treasures on Benjamin Franklin Parkway.  Nonetheless, the two neighborhoods have their own vibes. Fairmount is rather like an urban suburb – very residential with restaurants and pubs. It also has a major attraction in the Eastern State Penitentiary which is a huge prison that opened in 1829 and is today a museum. Spring Garden on the other hand, boasts beautiful Victorian architecture.

Philadelphia is one of the more affordable large cities in the United States at approximately $2,300 per month for a single person.  This includes average monthly costs for:

A single person living in Philly should plan to spend  around $1,500 per month in rent, $146 in utilities, $425 on food, $68 for internet and $152 for gas, according to a recent Move.org study. A family of four will likely spend close to $3,700 excluding rent. Cost of rent varies depending upon neighborhood. As with anywhere, some areas are more expensive to others. Compared to the largest east-coast city, this is a bargain with the cost of living index in Philadelphia being 21.22% lower than it is in New York.  One way to take control of these costs is to join other residents who have found that it is actually cheaper to buy than rent, and property tax is really low at just 0.98%. Philly’s housing market is lower priced than most in the Northeast U.S.

Costs can also be managed with transportation. Traffic and parking in Philadelphia is not for the faint of heart. However, Philly is known as one of the most walkable cities in the country. William Penn, the city’s founder, planned it on a simple grid. Navigation is a snap with east-west streets named after trees and north-south streets being numbered. In addition he added five lovely public squares.  Not only is the city walkable, it is also very bike-friendly with in excess of 440 miles of bike lanes and 140 stations throughout the city that have a total of more than 1,300 bikes for rent. Plus, it has a comprehensive commuter system with commuter rail, subway and bus systems.

Philadelphia is home to 10 of the country’s largest legal firms and 12 Fortune 500 companies, including Crown Holding and Comcast, which have their headquarters in greater Philadelphia. With its close proximity to the nation’s capital, the U.S. government also has a significant presence in Philly, including East Coast operations of the U.S. Mint as well as a part of the Federal Reserve Bank. In addition the city of brotherly love has a reputation of being one of the largest health education and research centers in the United States. Check out our guide on the best companies to work for if you want to see some more in depth information on the companies you can work for in Philly.

Just like any other city in the world, crime is present in Philadelphia. However, it varies depending upon the neighborhood or part of town you’re in.
Unfortunately, in 2020, Philly has the second-highest murder rate when ranked against the ten largest cities with Chicago claiming the top spot. In general, Philadelphia has a higher than average crime rate, however, just like anywhere else, you can take precautions to make yourself safe. Be highly aware of your surroundings and stay away from areas known to be dangerous, and check out our guide on the worst neighborhoods in Philadelphia. Don’t venture out alone, especially on foot at night.

With all the vital statistics are out of the way, it’s good to know more about the surrounding area as well. Philadelphia is centrally located within two hours of the Pocono Mountains; Delaware Water Gap with its scenic mountains, rivers, waterfalls and forests; 27 miles of the Appalachian Trail; the Atlantic Ocean (beach anyone?); Washington, D.C.; and New York City.

Philadelphians can take in a Broadway play one night and go skiing in the mountains the next day. The options for activities are seemingly endless. Also nearby is Longwood Gardens, a nearly 1,100 acre botanical garden featuring meadows, woodlands and formal gardens. Valley Forge National Historic Park, which is the site of the famous Revolutionary War encampment. There are trails within the park that connect historic structures and key monuments.

The question for residents isn’t so much what can we do, it’s more what should we do today. There is as much variety as there are types of people. Feel like hanging out out doors – head to a city park, the beach, the forest or up to the mountains for a hike. Does today feel more like a day for history? You can stay in town and visit the sites locally or head to Washington, D.C. and soak up as much history as you want in the museums and monuments there.

Maybe the family was thinking that a cultural experience would be better. There’s always a day trip to NYC for world-class museums and theatre; or you can stay home and experience culture the Philadelphia way taking in the art galleries, theatre and cultural events in your back yard. You can always head to Old City for culture, and be sure to check out our 5 Best Things To Do In Old City before you go! Up for a culinary extravaganza? Philadelphia has plenty of amazing chefs just waiting for you to sample their fare.

When it comes right down to it, answering the question, “should I move to Philadelphia”? should be pretty easy. This is a city that has something for everyone no matter their age or interests. There is so much to do and experience, the next questions being asked will likely be, “Why did I wait so long to move here”?