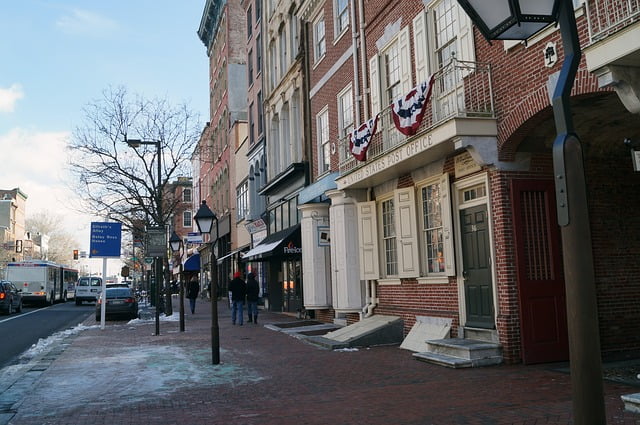 A trip through Old City Philadelphia will spark the imagination and make you more appreciative of the rich history of the United States of America. This Pennsylvania gem is brimming with museums, stunning architecture, a bustling waterfront area, and a vibe that exhibits the spirit of the nation. As the site of the first national capital, it is no surprise that Old City Philadelphia is full of interesting things to see and do. Here are five of the best things to put on your itinerary list when visiting this popular Philadelphia location.

The National Constitution Center and its Environs

Start your tour of this quaint area with a visit to the National Constitution Center. This vast complex features a variety of exhibits, live performances, and educational programs that shed light on the country’s most treasured piece of law.

You will be inspired after watching the moving 17-minute theatrical production called “Freedom Rising.” The Story of We the People is an interactive exhibit that will immerse visitors in the nation’s storied history and the path to freedom.

This center is located just two blocks from both the Liberty Bell and Independence Hall, making it easy to knock out all of these prime attractions at one time. Inside the Great Essentials Exhibit at Independence Hall, you will find original printed versions of documents such as the Declaration of Independence, the Constitution, and the Articles of Confederation.

As one of the most iconic symbols of the nation’s fight for independence, a visit to the Liberty Bell is also a bucket list travel item.

Boasting the distinction of being the first US Mint, the Philadelphia location is worth your time. Visitors can take a self-guided walking tour, lasting approximately 45 minutes depending on how much you want to see along the way.

You can view coins being produced from a perch located 40 feet above the factory floor. Also available to see are the first coining presses dating back to 1702. Kids will especially love seeing money being made in real time.

The second floor of the facility also offers a wide range of historical exhibits to complement the touring experience. The free tour is offered on weekdays from 9:30 am to 4:30 pm.

While the original Christ Church was founded in 1695, the current building dates all the way back to 1744, making it one of the oldest churches in the country. Even today, the stately church still holds weekly services.

This church was often visited by many of the Founding Fathers, including George Washington and John Adams. The legendary steeple was designed by architect Robert Smith, a true visionary of the time.

In addition to the church, you can also visit the adjacent graveyard where seven signers of the Declaration of Independence and five signers of the Constitution are buried. The church and its tranquil grounds are open for tours on Monday through Saturday during the hours of 9am to 5 pm with Sunday hours from 1 pm to 5 pm.

If you do not have time to tour the interior of the church, you should at least make it a point to walk by the site to check out its gorgeous facade.

As the birthplace of the American flag, the Betsy Ross House is no doubt one of the most popular places to visit while in the area. The house is now over 250 years old and is a classic example of the architecture of this time period.

The Betsy Ross House has over seven period rooms, complete with furnishings and other exhibits. Included in the house are tours of the kitchen, a sitting room, and bedrooms.

The museum is home to replicas of Ross’ upholstering tools and family artifacts. A separate audio tour for children makes a visit to this house and museum especially entertaining and relevant for the younger people in your travel party.

Be sure to verify hours before you visit since the house is on a reduced operating schedule during the winter months.

A true Philadelphia legend, it is no surprise that Benjamin Franklin has an entire museum dedicated to him.

The Benjamin Franklin Museum houses a bevy of personal artifacts of this prominent Founding Father. Franklin was a real renaissance man and this museum pays tribute to the contributions that he had on this nation as it emerged as its own entity.

Children will delight in all of the hands-on interactive exhibits of the museum. A sun-drenched courtyard just outside the museum is a great place to relax on a nice day.

As the most historic square mile in the country, there is no shortage of things to see and learn while in Old City Philadelphia. While visiting the area, be sure to leave time to indulge in the various food and drink options, relax in a hammock in Spruce Street Harbor Park, check out the happenings at Penn’s Landing, and more. This historically significant region is the perfect place to get lost in history and immerse yourself in this fascinating and pivotal time period.