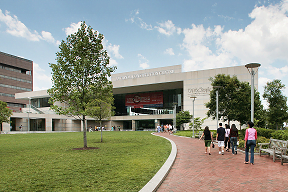 Last week we discussed the troubling clouds circling over the Avenue of the Arts as two of its anchors — the Prince Music Theater and the Suzanne Roberts Theatre face foreclosure. Travel fewer than ten blocks east and you will see those same clouds circling over Independence Mall.

Ten years ago the region’s one percenters came together around a pretty good idea (or at least so they thought at the time): invest capital in historic tourism to drive more visitors to Philadelphia and more days per visit. Within a few years, Independence Mall boasted a brand spanking new Independence Visitor’s Center and the National Constitution Center, extending the tourist footprint north to Arch Street. Then the Liberty Bell Pavilion was constructed, the National Museum of American Jewish History took the corner of Fifth and Market and within the year we will see yet another museum spring up at Third and Chestnut: the National Museum of the American Revolution.

AxisPhilly (we miss them) addressed the future of these institutions and found some disturbing signs: in 2013, “Fewer than 400,000 people bought tickets for the National Constitution Center, which is right next door to the visitor’s center (total visitors to the center totals 828,000 because the count includes people who attend non-ticketed events and lectures). The Jewish History Museum, housed in an elegant new building just one block to the east, drew barely more than 100,000 visitors — less than half the number originally projected when the museum opened two years ago. And the more established African American Museum, which is two blocks away at Seventh and Arch, got just under 65,000 people — so few it’s now open only four days a week.”

As with their cultural counterparts to the west on the Avenue of the Arts, these struggling institutions seem to be looking around and asking themselves what happened.

Yael Eytan, director of marketing and communications for the Jewish History Museum, told AxisPhilly: “We’re still trying to figure out exactly what our optimal and realistic attendance numbers are. In the past, there have been some cases where these projections been made in a less scientific way than they should have been.” Steve Rosenberg, vice president for communications at the National Constitution Center (NCC), told Axis, “It’s not like walking around the mall in D.C., where you can just walk in and out of every museum for free. We’re still really trying to define our audience.”

C’mon, guys. Take the opening year attendance numbers for the Jewish History Museum, cut them in half and start there. NCC, stop crying into your beer and come to terms with the fact that charging money for what you have when Independence Hall is free is always going to drive your attendance numbers down.

So let us provide two aggressive measures designed to turn around this downward spiral.

The Jewish History Museum should transform itself into the National Museum for Immigration and Independence. It should take the African American Museum collection and add Latino and Asian collections and make it a museum that celebrates immigration across many cultures. That way, the family from China visiting the Liberty Bell might decide to shell out $100 for a museum that speaks to their culture when there is much less of a shot for their dollars to walk into a museum that only celebrates Jewish history in America.

For the NCC, it should become the repository for famous original documents related to the American Revolution. We are encouraged that the NCC has started to figure this out, having plans to add one of the 12 surviving copies of the original Bill of Rights — a move they expect to boost attendance by 10 percent by the end of the year. The NCC should go one step further. Get one of the original copies of the Declaration of Independence, called the Dunlap Broadsides (there are currently three in Philadelphia), put it on display for free in the lobby and see what happens.

These moves may seem a bit bold but we are talking about securing Philadelphia’s rightful claim as the birthplace of the nation. A claim that bold demands actions equally bold to back it up.