Skip to content
Home » People » The Beauty He Began 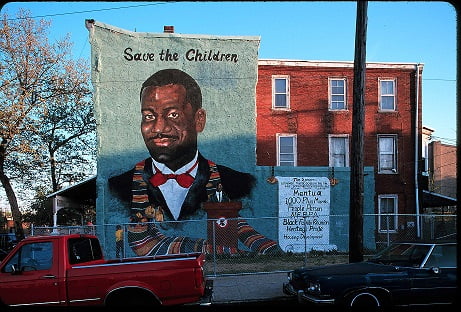 With the Mural Arts Program celebrating 30 years since its inception, I thought this would be a good time to look at the network that gave birth to it and the man who led it — beginning with the mural depicting him, in the Mantua section of Philadelphia.

But a search for the mural, featuring Tim Spencer donning his trademark African kente cloth scarf, netted no sight of it on a Saturday morning.

At the former site of the mural, at 34th and Wallace streets, is a new building with a clean, artless wall.

It strikes me as a metaphor for the way we whitewash the accomplishments of our urban predecessors, clearing the way for the new and the funded.

The mural, painted over more than a year ago for development, according to a Mural Arts spokesperson, disappeared with little fanfare.

However, the Rev. Larry Patrick noticed, because he occasionally would drive by the location to see the larger-than-life-size painting of his old friend, mentor and boss. “I would look up at him and just say, ‘Thank you,’” he says.

Now pastor of Redeem Baptist Church, 31st and Arizona, Patrick says, “Many of us today are pretty good, stand-up citizens cause of what Tim poured into us. He was a genuine person, and he was a great leader. Not a good leader, a great leader.”

We have not escaped graffiti — in our neighborhoods, along thoroughfares, in Center City. Along 16th Street in Center City, a culprit echoed his message on building after building for blocks. I hated the sight of it. But in the late ‘70s and early ‘80s, graffiti was bad. In Spencer’s 1996 Philadelphia Daily News obituary, former chief of staff for Ed Rendell, David Cohen noted how one man whose property was spray-painted grew so frustrated he vowed to shoot the culprit.

Goode formed the Anti-Graffiti Network and hired Spencer to run it. The effort resulted in prosecuting graffiti writers, and then forcing them to work off their punishment by painting over graffiti.  Task Force workers developed relationships with the young writers, with more than 1,000 youth eventually given summer jobs to beautify the city.

In 1984 Spencer made one of his most famous hires — Jane Golden, who stressed to Spencer that the youth he’d hire her to work with wanted to create murals. And so the early murals went up, 1,300 under Spencer’s directorship, before the Mural Arts Program became a stand-alone division.

The program has come a long way, now boasting more than 5,000 murals across the city.

But Barbara Daniel Cox, also from Mantua and who worked in City Hall during Spencer’s years there, recalled Spencer “tapped the young people so much, and motivated them to use their energy and hands for creative, positive art, and turned them away from art that was defacing people’s property.”

She adds, “He had a commitment to Mantua, and the presence of the mural there reminded people that someone from our neighborhood can do good, positive things.”

More change is coming to Mantua, with its recent designation as a federal “Promise Zone.” But through it all, I hope the Spencer mural returns, and that we can be reminded of the beauty he began.