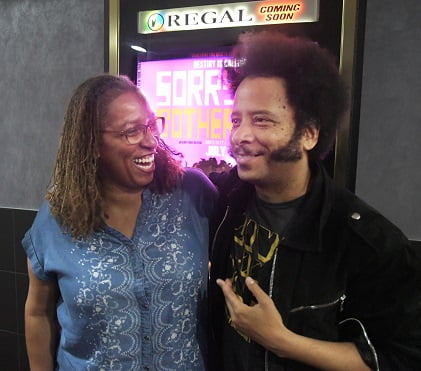 Boots Riley peeks into the United Arts Riverview theater on Columbus Boulevard to see movie patrons exhibiting everything from bouts of uproarious laughter to gasps of emotional surprise as they take in a screening of his newly released film, “Sorry to Bother You.”

“They’re almost literally rolling out of their seats,” Riley says with great satisfaction, following the July 15 special viewing. “It’s an unpredictable movie, so it’s been a great response.”

The film follows a young African-American man who finds success and personal tension when he discovers the wonders of using his “white voice” to win over customers in his telemarketing job. It opened in Philadelphia as part of a limited release.

The delights of “Sorry to Bother You” have particularly been lauded by Riley’s biggest local fan, his sister Denise James. She is an award-winning former 6ABC reporter who heralded the film’s release. Overcome with pride for her brother, she gushed on Facebook, “Once again, I am in tears as I write this.”

Riley was born in Chicago, but grew up in Detroit and Oakland under the influence of activist parents, which led him to numerous areas of work. At one point, he taught a class called “Culture and Resistance: Persuasive Lyric Writing” to students at the School of Social Justice and Community Development in East Oakland.

In the early 90’s, Riley helped found the political hip-hop group The Coup, and was lead vocalist for a rap-rock band. Part of the Bay Area rap scene at the time, he even appears in a video by rapper E-40, singing and dancing with Tupac Shakur as they dance in front of a mirror to E-40’s 1993 song, “Practice Lookin’ Hard”.

But, the buzz around Riley’s filmmaking is real.

A day after his Philadelphia visit, he appeared on CBS Morning News where his film was “hailed as one of the summer’s big hits by critics.”

Riley admits the enthusiasm was unexpected.

“I’ve never done this before,” he said. “I just hoped people would like it. I knew it was a gamble, because whenever you do something that’s different — that’s a different structure than what other folks are doing in just that it’s different — to some people that feels bad, like is wrong. … But I knew, some people have been hungry for something different, and for something that really talks about things, where the comedy points are, and that they can relate to in a strong way.”

And he’s not likely to stop venturing into new territory anytime soon.

“I don’t want there to be one thing [that people take away from the film],” he responds to a reporter. “You have all those gimmicks in movies, where [filmmakers] say ‘I got a great idea,’ and it’s just that. I got a million great ideas, and this film is at least a couple dozen of them.”