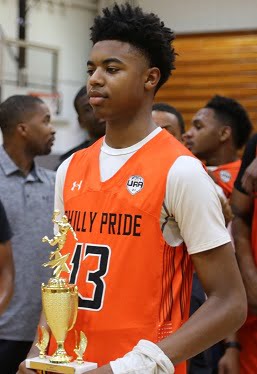 Roman Catholic High School may have lost star guard Lynn Greer III to an Oak Hill transfer this summer, but the Cahillites will still likely be favored to win the Catholic League and state title again. One of the reasons for that is the emergence of Hakim Hart, this summer playing for Philly Pride AAU program locally and nationally.

“He’s been tearing it up for us all summer,” said Philly Pride director Amauro Austin. “He was a shooter when he came to us but his all-around game is showing its colors this summer.”

Philly Pride, led by Hart, beat favored WeR1 in a top game in a national event in Atlanta on July 15. “We are having a great summer and seeing Hakim take such a jump for us in all aspects of his game has been great,” said Austin. Roman is bringing in two top freshmen and also returns Seth Lundy a major Division I prospect. “Losing Lynn Greer is a blow but there is still a ton of talent there,” said Al Rubin, a top area scout for Hoop Scoop. “The Roman team has won three of the last four league titles and they will be strong again. Hakim Hart has made himself a major Division I prospect.”