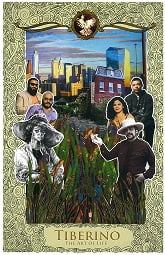 Philly’s ‘First Family of Art’ to premiere ‘Tiberino: The Art of Life’ documentary

What’s an appropriate next step for a family of artists who live in a museum? How about a documentary?

On Saturday, Jan. 31, the Tiberino family — so talented they’ve been called everything from “The West Philly Wyeths” to “Philly’s First Family of Art” — is hosting a premiere of  “Tiberino: The Art of Life.” It takes place at the Trocadero, in Chinatown.

Of the film, the elder Tiberino, Joe, offers, “This will be the 50-year history of a family, starting with my relationship with my wife. [Mom Ellen died of cancer in 1992.] And the film shows how we all developed as artists, and covers just about everything we’ve been involved in.”

By “all” he means daughter Ellen with her stained glass and ceramics, son Raphael with his impressionistic paintings, son Gabriel the muralist, and son Latif who (supposedly) isn’t an artist. “Then there are other artists,” Joe adds, “who are like part of the family (such as Moe Booker). We’re all interconnected. It’s a whole network of art.”

The documentary features archival footage from Joe’s own filmmaking, interviews with news organizations including CNN, footage of the MOVE bombing, and opening narration by former Gov. Ed Rendell. And it features, of course, the art — murals, sculptures, paintings and the social, political, historical and religious references that fuel it.

However, Raphael interjects, “It really isn’t just about artists.” When his parents married, their family was hardly “the status quo,” he stresses, noting, “A guy from Kensington marries a black girl from West Philly. It’s a very wonderful love story.”

Ellen, a graduate of Overbrook High School, studied at the Pennsylvania Academy of the Fine Arts and became a major talent with pencil and paintbrush. Joseph, of Italian heritage, graduated from the University of the Arts and is a muralist, easel painter, printmaker and filmmaker.

When the family in 1999 opened its home at 3819 Hamilton Street as the Ellen Powell Tiberino Memorial Museum of Contemporary American Art, Philadelphia Inquirer art critic Edward J. Sozanski wrote, “The spirit of this space, which in large part is Ellen’s spirit, is infectious. Even a casual visitor can sense that the people who live in this compound, which involves nine properties on both sides of the block bounded by Hamilton and Spring Garden Streets, not only love art but care for one another.”

New Jersey filmmaker Derrick Woodyard, who worked on the film, says the documentary’s premiere on Jan. 31 will be followed by a screening for the public, entry into film festivals, online streaming, DVD sales and national distribution.

While Raphael eagerly welcomes the documentary as a way to spread needed awareness about the family’s art, “Tiberino: The Art of Life” seems to fit comfortably with the steps the family took in creating the museum. In the documentary, Joe explains, “It’s a natural outgrowth of what we do.”